What is an Altar?

An Altar is an elevated place or structure, as a mound or platform, at which religious rites are performed or on which offerings are made to gods, ancestors, etc.
Altars are as every bit unique as a person is. They can reflect both our spirituality and our personality. It can become our sacred space where we leave the mundane behind to create something magickal. But it also is a key place of worship for our Deities as well as our Ancestors. That being said, there are some different types of altars and shrines. An altar is generally for any magickal workings, the space a witch sets up for an Esbat, Sabbat, Rituals or permanently for all sorts of practices (examples: divination, meditation, etc.). It is the place for transformational change. In contrast, a shrine serves to honour a person, deity, or concept. Offerings and prayers may be given here. People tend to create shrines after a passing or tragedy as well. It is more of a place to connect rather than to do magick. There are many items you can place on your altar; just remember there is no right or wrong items to include! 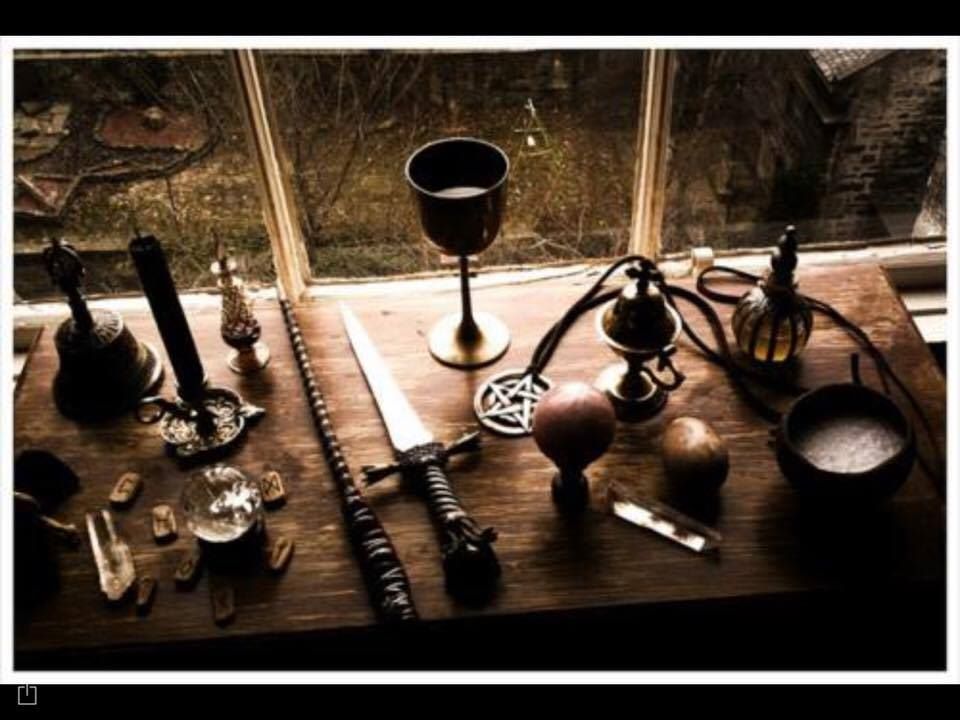 If you practice divination, you may decide to add your divinatory tools to your altar such as runes, crystal ball(s), oracle and/or tarot cards, etc. Adding one oracle or tarot card (or more) to your altar can be used for magickal and/or meditative purposes. If you are new to magick, don't get caught up in the belief that you have to have every magickal prop or tool on your altar for it to be complete. Tools are great to have, but many of them can be substituted with what you already have at home and in your garden.

Adding things from nature to your altar can help you connect to the land around you, get to know your surroundings, the land and the environment in which you live. As the seasons change, bring items from outside to your altar to reflect the turning of the wheel. Branches, leaves, acorns, flowers, stones, rocks, snow and rain are just a few things that you can add to your altar that cost nothing! Popular for altars are crystals to add and amplify the energy of your altar. If you have a big enough altar, you can create crystal grids for certain workings. If you design an altar to be a working altar, where spells and magickal workings are done, instead of an altar for only honouring and devotion, you will find that the altar will get dirty. There most probably will be candle wax on it and if you work with powders and/or oils, it's going to get messy! If your altar is a working altar, like mentioned before, whenever you feel the need to rearrange and clean your altar is up to you. Cleaning your altar on the new or full moon can be a good way to remember, if you want to regularly attend to cleaning your altar and preparing it for the next moon cycle or month.

Ultimately, it is up to which if any of these tools you decide to use. You may want all of them or you may want just a few. Tools find a way to come to you naturally when you need them. Forcing yourself to settle for a tool just for the sake of having them will render them ineffective and leave you wanting. There are other tools used by different people that were not listed here. The tools presented above are the most commonly heard of or recognized tools.